Dan Brown, author of the mega-hit The Da Vinci Code and several other thrilling mystery novels returns with  a book closer to a tour guide than a suspense novel. 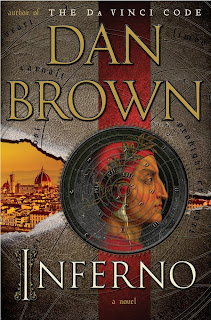 We return to follow the Harvard professor of religious iconography and symbology Robert Langdon as he wakes up in a hospital bed with a gun-shot wound to the head and no recollection whatsoever of the past two days, only to instantly be chased together with his new sidekick, Dr. Sienna Brooks, at gun point by a strange woman. He is now once again thrown into a life-and-death treasure hunt concerning famous historical locations, artifacts and pieces of fine art.

This premise basically screams "rip-off!", not only because amnesia is one of the most overused set-ups for mystery solving, but because it is otherwise an exact replica of the other three novels starring Langdon - Angels & Demons, The Da Vinci Code, and The Lost Symbol. And make no mistake about it, this is by far the worst one. So if you didn't enjoy any of the previous stories, run. Run as fast as you can.

Amnesia, whilst being beyond cliche, can be effective when it comes to adding suspense, depending on how the rest of the story plays out. But here, it is nothing more than a let down. Dan Brown appears to take advantage of this trope at times, but he always squanders it.
Speaking of squandering, the only remotely interesting character in the entire novel is Dr. Brooks, who is given a fairly intriguing back story early on. But she is put on the back burner for the entire story, hardly doing anything besides adding some additional information to Langdon's art/history/symbol rantings, and react to some of the things he says. As for Langdon himself, he is worse here than in any of the other novels. Following him is equivalent to about as much fun as watching grass grow. He does next to nothing except acting as a tour guide, spouting of dreadfully dull information about the various pieces of art and locations and whatever else they stumble across. And when he doesn't do it, the narration does. This is the worst aspect of the novel. It is - no joke - close to being a tour guide than it is a suspenseful thriller. Far, far, FAR too much time is spent on describing whatever they come across and nearly every time it pulls you out of the story and events taking place. Not that they were particularly good in the first place.

But brace yourself, that's not the only way this book is drawn out. No, here we have features like saying something in 10 sentences, which could easily be said in two, and making it much more interesting. And Dan Brown does this a lot. My guess is he either wanted to draw these moments out to add extra amount of suspense for what's about to be revealed, or he simply wanted to add a couple of extra pages to his book. In either case, the reader will always figure out what's about to be revealed long before it's actually stated, which thus does nothing to add suspense, but instead kills every ounce of it, making the rest completely tedious to read through.

To be fair, Inferno isn't terrible all the way through. There are a few occasions where it peaks your interest, like the villains objective. But those are too few and far in between. And as for the villain, there is one thing that doesn't make any sense; The clues Langdon and Sienna follow are placed by the villain himself. If he was really so smart - they often refer to him as a genius - he would have simply removed the evidence so no one would have any chance to stop his plan, and he could have removed nearly every single clue without any effort.

The bad:
Squandered set-up and side-kick character
Anti-climactic finale
More like a tour guide than a thriller novel
Draaaaaawn out
Unintersting cast and a very dull Robert Langdon
Posted by Kenikki at 3:28 AM